Internet companies publish different types of data and metrics in their transparency reports. The following list is not exhaustive, but identifies the most commonly-disclosed reporting categories across the industry:

Transparency reports on legal requests for user information contain data and metrics on the requests received from government, law enforcement, and other third parties, usually in the course of a criminal, civil, or national security investigation. Legal information requests almost always ask for “non-content” information such as basic subscriber information (i.e., user’s email address), but sometimes they also ask for “content” information (i.e., user’s messages, posts, photos, etc). Before a company discloses this information, it will review the request to evaluate whether it is legally valid. Requests that ask for user content will often have more stringent requirements before companies can disclose such information. Companies may also receive emergency disclosure requests; these non-binding requests are submitted by law enforcement in urgent situations where the information in question is necessary to mitigate an imminent risk of death or physical injury. In this scenario, companies may voluntarily disclose the minimum amount of information necessary to avert the potential harm, but usually require that the law enforcement agency provide the proper documentation within a reasonable timeframe after the crisis has been resolved in order to show that the request was deemed legally valid.

At their most fundamental level, transparency reports on legal requests for user information typically provide the following metrics for a given period: how many disclosure requests were received, how many users were the subject of those requests, and how many of those requests were complied with (i.e., some or all information was disclosed). The report will also usually segment the data by the different legal process types received (i.e., search warrants, subpoenas, etc.) and from which country the request originated (i.e., United States, India). The most basic form of reporting in this category includes metrics on government requests on criminal matters, which are often the highest volume, but some reports also produce metrics on civil, non-government requests. Companies may also publish data on government preservation requests, which are requests to temporarily preserve information from a specified account until a valid legal process is issued. Although it varies from company to company, a preservation is generally a snapshot of the account and its information at a certain point in time, and that information is preserved, unchanged, for a limited period of time even if the user changes or deletes content in the account. For companies based in the United States, it is also common to report on national security requests, including metrics on both Foreign Intelligence Surveillance Act (FISA) court orders and National Security Letters (NSLs). Unlike other transparency reporting categories, U.S. law places specific restrictions on how, what, and when companies can report national security requests in their transparency reports.

Examples of Transparency Reports and the Types of Metrics Reported

Cloudflare’s transparency report uses the national security section to educate readers about some of the reporting restrictions required by U.S. law. 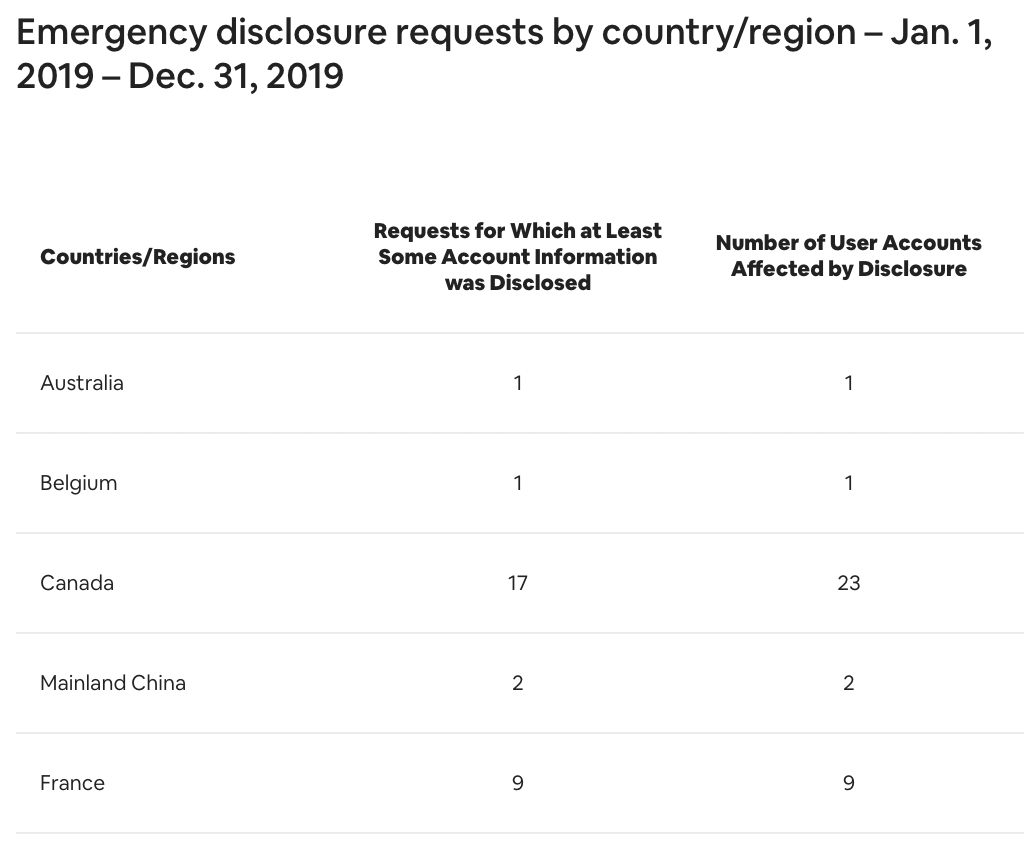 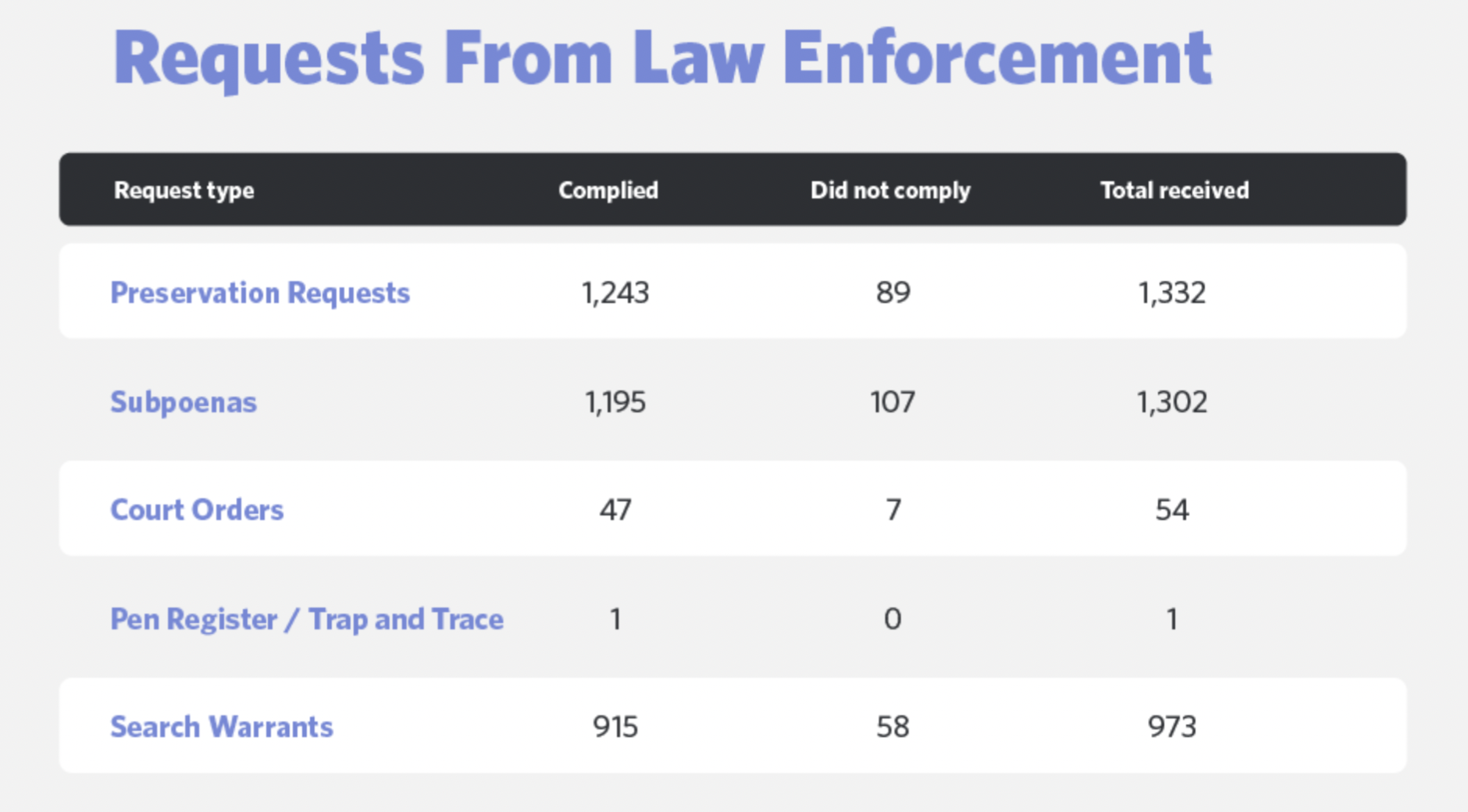 Discord’s transparency reports provide information on the number of preservation requests they receive along with other forms of legal process. 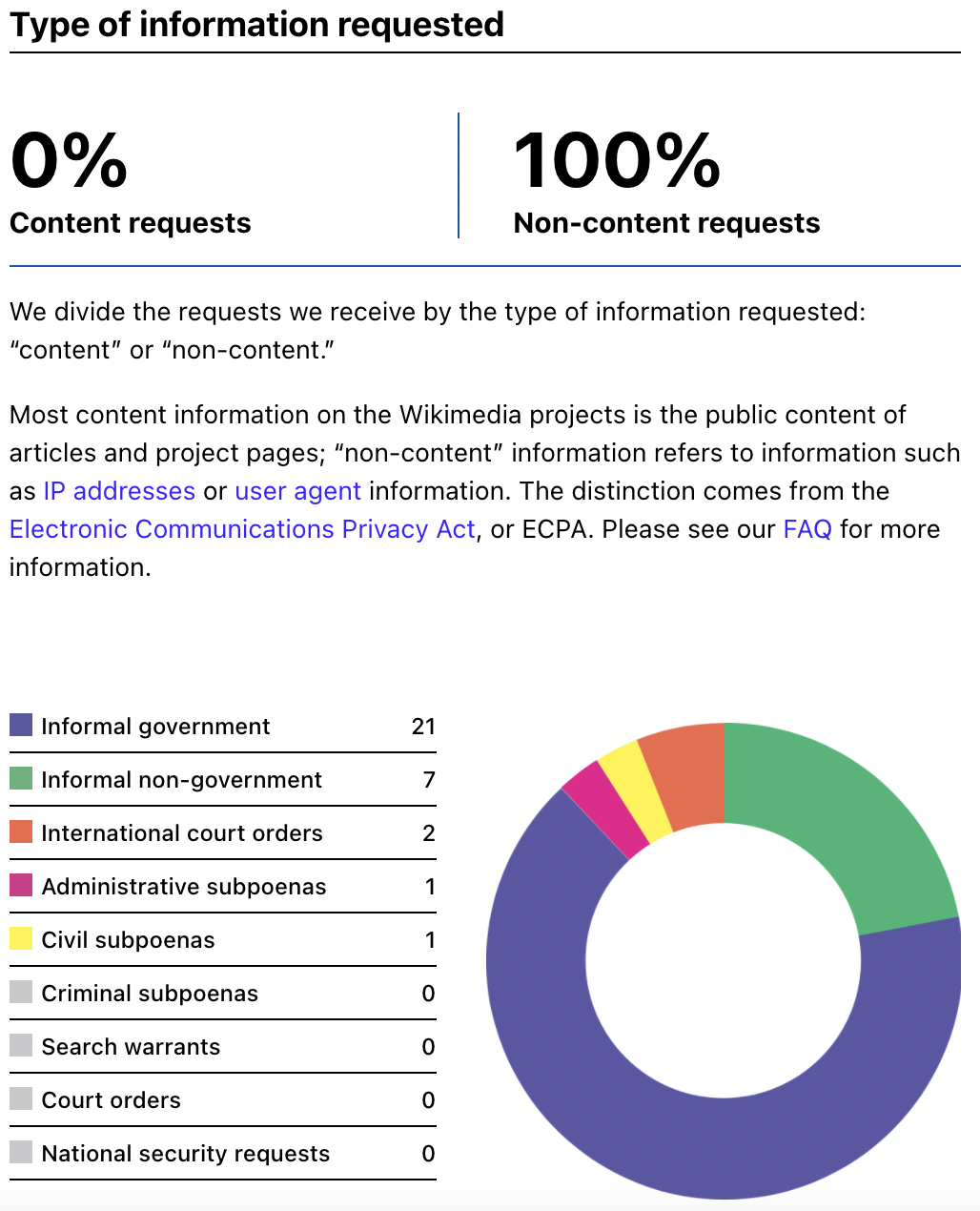 Wikimedia Foundation’s Jul – Dec 2020 report segments government requests by specifying whether they were informal or accompanied by the appropriate legal paperwork. 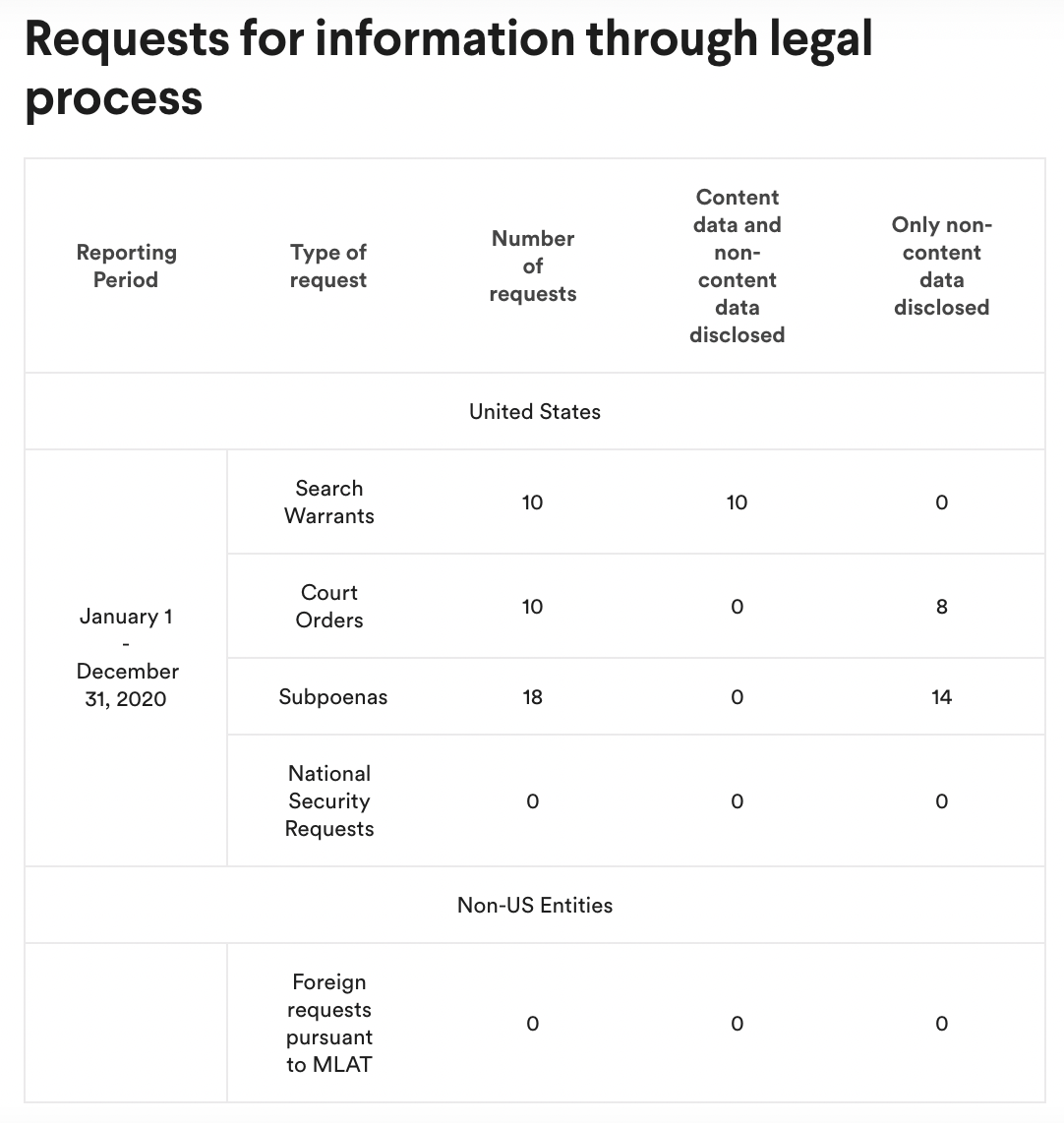 Slack’s 2020 report illustrates the different types of legal requests they received that year.

The transparency report on legal requests for user information is an important part of the public debate around government surveillance and digital privacy. Some recent examples of how the data in transparency reports have supported this debate  include the reports on increasing volume of U.S. national security demands and corporate non-compliance with the Hong Kong National Security Law.

Transparency reports on legal content takedown requests include data and metrics on the requests received by internet companies to alter or remove content that allegedly violates a local law. These requests can come from governments, law enforcement agencies, judges, lawyers, and even private citizens. Companies may respond to such requests by removing the content globally for a policy violation, or by “geo-blocking” content, which means that its availability will be restricted in the country where that content allegedly violates local law.

At a minimum, transparency reports for this category disclose the number of takedown requests received from each country and the number of accounts or pieces of content actioned as a result of those requests during a given time period. Although companies do not generally divulge the details of legal takedown requests to the public, some have started providing high-level information about requests that may be of public interest.

Google’s government removals report highlights requests that may be of public interest. 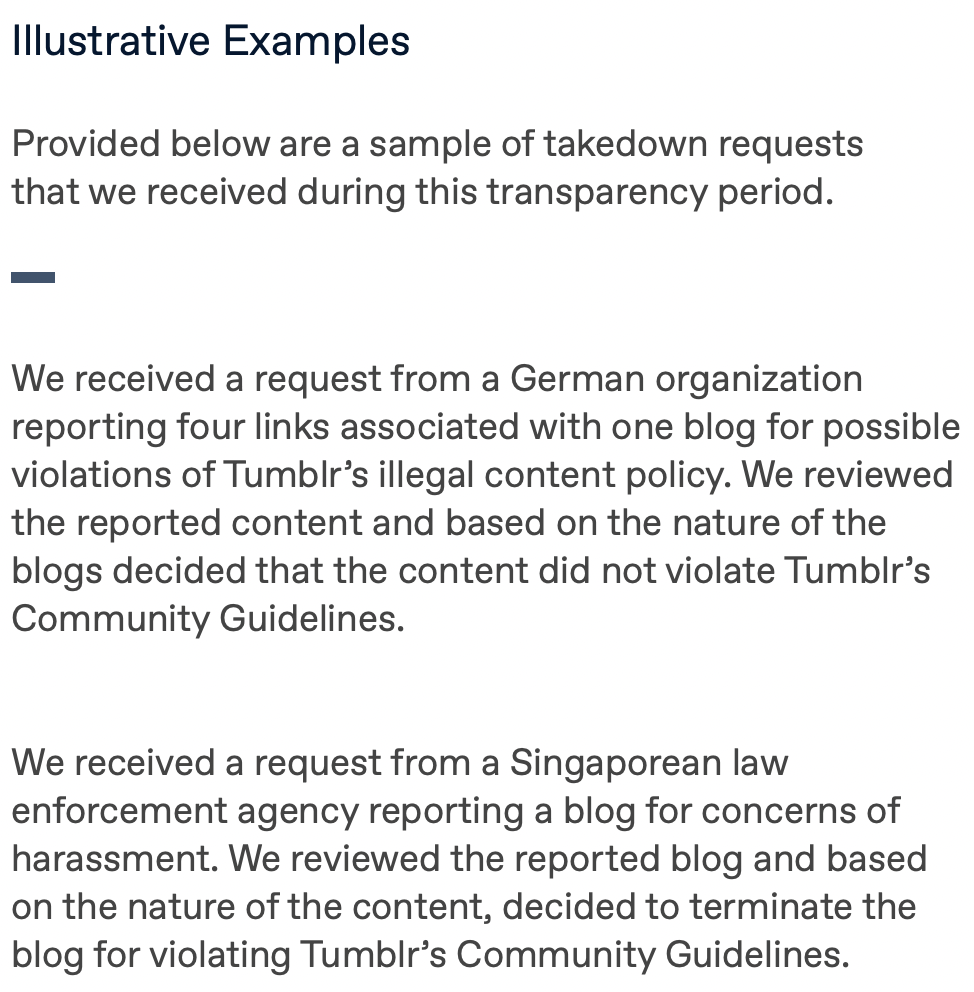 Sometimes, local law aligns with a company’s own content policies; for example, while child sexual abuse material (CSAM) is illegal in the vast majority of countries, this content also violates the policies of all mainstream internet companies. Thus, if a company receives a legal takedown request for child sexual abuse material, they may remove it globally and categorize it as a platform policy violation rather than as a legal takedown request. Outcomes like these are not always reflected in transparency reports, although some companies choose to report them as a separate “content policy violation” category alongside the legal takedown requests category.

By contrast, it is not unusual for local laws to prohibit content or behavior that is otherwise acceptable according to a company’s policies; for example, Thai law prohibits criticism of the Thai monarchy, even though most companies permit their users to engage in such discussion. In these cases, companies may respond to such takedown requests by “geo-blocking” content. This means that the content will not be available in the country where it allegedly violates local law, but will remain available to users in all other locations.

Many legal takedown requests are relatively uncontroversial; for example, government takedown requests often include the unauthorized sale of regulated goods or accounts impersonating government officials. However, internet companies also frequently receive takedown requests from governments and others aimed at censoring legitimate online speech under the guise of legal violations. The legal content takedown section of a transparency report is therefore critical to the public’s ability to monitor government threats to digital free expression, in addition to corporate compliance with those threats.

Transparency reports on policy enforcement include data and metrics about the moderation and enforcement actions taken according to the company’s own policies. Content policies (also referred to as Community Standards or Community Guidelines) explain the types of content or behavior that a company prohibits, and often also explain the remediation methods when a user breaks those rules. You can read more about content policy in the Creating and Enforcing Policy chapter.

The transparency report on policy enforcement includes metrics such as:

The report may also segment the data by different violation types (e.g., spam, violence), how the violation was detected (e.g., automation, user reporting), and product type. While content policies vary widely across companies, there are several common categories of violations that are generally shared and reported on within transparency reports, such as child safety and hate speech.

Policy enforcement is a relatively new and emerging category of transparency reporting, and companies continue to innovate and expand upon the types of data and metrics they release. While metrics on the volume and outcomes of enforcement actions set an important foundation for this reporting category, there is a growing push for companies to publish metrics that measure how effective those enforcement actions truly are at preventing harm or bad experiences. Presenting contextual metrics and information alongside removal numbers helps readers understand and evaluate the effectiveness of a company’s efforts to protect its users. Examples of contextual metrics include the “prevalence” metric released by Facebook, the “violating view rate” released by YouTube, and the “reach of policy-violating Pins” metric released by Pinterest, all of which use different methods to measure user exposure to violating content. Metrics like these can be challenging to generate, but act as an important accountability mechanism that incentivizes companies to continuously improve the true effectiveness of their policies and enforcement systems.

The online enforcement decisions made by a company often have offline impact. As a result, transparency reporting on policy enforcement provides critical insight into how companies think about moderation decisions on their platforms that subsequently influence real-world events, such as  Twitter’s decision to suspend the account of former U.S. president Donald Trump for violations of its “Glorification of Violence” policy. Because these actions can have a profound impact on free speech and expression on the internet, companies should provide transparency into these policies and their enforcement. With the increasing significance of and public attention on platform policy enforcement, transparency reporting on policy enforcement will almost certainly become mandatory in the European Union and may become so in the United States as well.

BACK TO TOP
We use cookies on our website to give you the most relevant experience by remembering your preferences and repeat visits. By clicking “Accept”, you consent to the use of ALL the cookies.
Do not sell my personal information.
Cookie SettingsAccept
Manage consent

This website uses cookies to improve your experience while you navigate through the website. Out of these, the cookies that are categorized as necessary are stored on your browser as they are essential for the working of basic functionalities of the website. We also use third-party cookies that help us analyze and understand how you use this website. These cookies will be stored in your browser only with your consent. You also have the option to opt-out of these cookies. But opting out of some of these cookies may affect your browsing experience.
Necessary Always Enabled
Necessary cookies are absolutely essential for the website to function properly. These cookies ensure basic functionalities and security features of the website, anonymously.
Functional
Functional cookies help to perform certain functionalities like sharing the content of the website on social media platforms, collect feedbacks, and other third-party features.
Performance
Performance cookies are used to understand and analyze the key performance indexes of the website which helps in delivering a better user experience for the visitors.
Analytics
Analytical cookies are used to understand how visitors interact with the website. These cookies help provide information on metrics the number of visitors, bounce rate, traffic source, etc.
Advertisement
Advertisement cookies are used to provide visitors with relevant ads and marketing campaigns. These cookies track visitors across websites and collect information to provide customized ads.
Others
Other uncategorized cookies are those that are being analyzed and have not been classified into a category as yet.
SAVE & ACCEPT